Moldova is a small, but unique and charming country that produces rare merchandise less known on the global industrial market. Few people know that Moldova is part of the Old Continent and many people don’t even know it exists. Moldova is a landlocked country in Eastern Europe, located between Romania to the west and Ukraine to the north, east and south. The country is shaped like a bunch of grapes, which is  no coincidence: it has the highest percentage of land dedicated to vineyards in the world.

Over centuries Moldova has developed a rich tradition in wine making. Combined with the vineyards that surround the special tourist route, "The Wine Road of the Republic of Moldova", the wineries stand for an important attraction for the tourists, businessmen and specialists in wine-making in Moldova.

For many years viticulture and winemaking were the general occupation of the population. Evidence of this is present in historical memorials and documents, folklore, and the Moldovan’s spoken language. Nowadays, the country has a well established wine industry. Moldova has so many  wineries and they are  absolutely amazing. Purcari  was the first winery in Moldova, it was stablished in 1827.  The iconic Negru de Purcari is locally called the ‘Queen of England’ wine, as the royals order  at times, as did former international royalty.

Moreover, “Golden  Collection” Milestii Mici, with over 1.5 million bottles, was registered in the Guinness World  Records for being  the biggest wine collection in the world. The cellar stretches for 150 miles  of which “only” 35  miles are currently in use and it is the largest wine cellar in the world.

Moldovan people are so proud of their wine and it’s what makes this country truly special! Every year, traditionally in the first weekend of October, the National Wine Day is celebrated. Most remarkable wine producers  welcome thousands of guests and surprise them with the incredible variety and quality of their wines. In addition, traditional dishes, music, dances, handcraft workshops make this weekend truly memorable.

Another pearl of Moldova is Cricova cellar. It also represents an underground city, and is the second largest wine cellar in the world The massive labyrinth holds the impressive wine collections of celebrities and major political figures. Cricova is the first winery in Moldova that  produces sparkling  wine  according to the French classic method -“Méthode Champenoise”, discovered by the reputable monk Dom Pierre Perignon.

If we are talking about an extraordinary sparkling wine, then it is necessary to talk about an equally extraordinary aperitif - black caviar, dubbed the black gold of the world gastronomy. With dated traditions in Russia, the secret of getting the perfect caviar was also taken over by the Moldovan company, Aquatir, a large sturgeon farm that is located in the Black Sea region, the waters in which these rare and valuable fish historically harboured.

Aquatir  applies the latest developments and technologies in the field of sturgeon breeding.   It meets the highest international standards in caviar production which provides an eco-friendly high quality product that aims to impress and stimulate one’s senses.

With so many wonders into such a small country, Moldova will surprise and intrigue you at every turn, leaving you with unforgettable and unique  experiences.

Get in touch: Caviar Deluxe Limited

NEXT READ: Groundbreaking Innovations Set To Take The Restaurant Industry By Storm 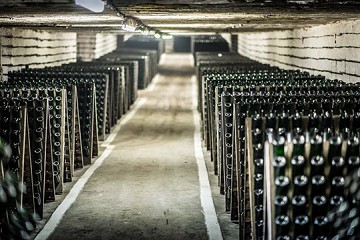