Wagamama to Launch a ‘Vegan Egg!’

The Pan-Asian restaurant chain specializing in serving Japanese cuisine takes their vegan menu to another level! This latest move sees the chain join the ever-rising global veganism trend, which teamed with the rising demand for a more sustainable lifestyle, has become a massive movement in 2019. According to the GNPD (Global New Products Database), 52% of UK meat-free product launches are now vegan and 40% of Brits (aged 25-34) are the most likely to have reduced their meat consumption in the last year.

From Quorn’s release of the ‘bleeding meat-free burger’ to Greggs ‘vegan sausage roll’, companies are now going beyond the mainstream vegan and vegetarian products already available. And the innovators at Wagamamas have gone far beyond what vegans could have ever expected - introducing the Vegan Egg! Following on from its menu revamp, which saw it  build on meat-free and dairy-free alternatives in 2017, it’s recently introduced plant-based ingredients such a ‘seitan’ in its sausages. This has seen the brand team up with Youtube ‘avant-garde’ cookbook author Gaz Oakley, to craft a dish of glazed BBQ seitan, caramelised oyster mushrooms, shredded carrot, spring onion and edamame. It will be served with a side of Wagamamas classic sticky rice, featuring the new egg, made with Sriracha mayo, lemongrass and miso-infused coconut. The egg white is designed to replicate a real egg and is of soft texture with its own extraordinary taste.

Gaz Oakley calls himself the ‘Avant-garde Vegan’ because of his attitude to always try new and exciting innovations when it comes to food. His most recent release ‘Vegan 100’ heavily features japenese cooking, which made for the perfect partnership with Wagamamas.  This new dish has been launched at the brand’s ‘Noodle lab’ restaurant in London Dean Street and Wagamamas in Cardiff.

NEXT READ: 8 Ways to get Sustainable 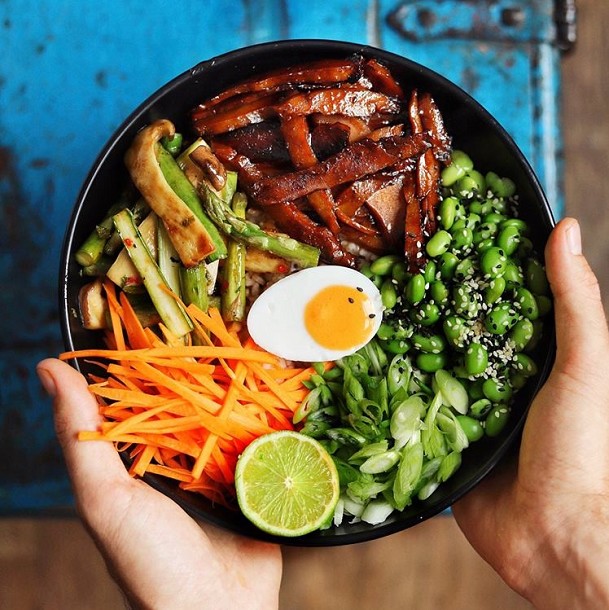